What happens after we eat?

When we consume mixed-nutrient meals (containing fats, carbohydrates, protein, fiber, and the thousands of other bioactive chemicals in our food), we experience short-term changes in circulating metabolites, which are referred to as postprandial (after a meal) responses (Figure 1). Postprandial responses can vary hugely between individuals, and this variation is influenced by several complex, interrelated factors that have been studied in detail in the PREDICT program.

The most commonly measured features of the postprandial response are changes in blood concentrations of: 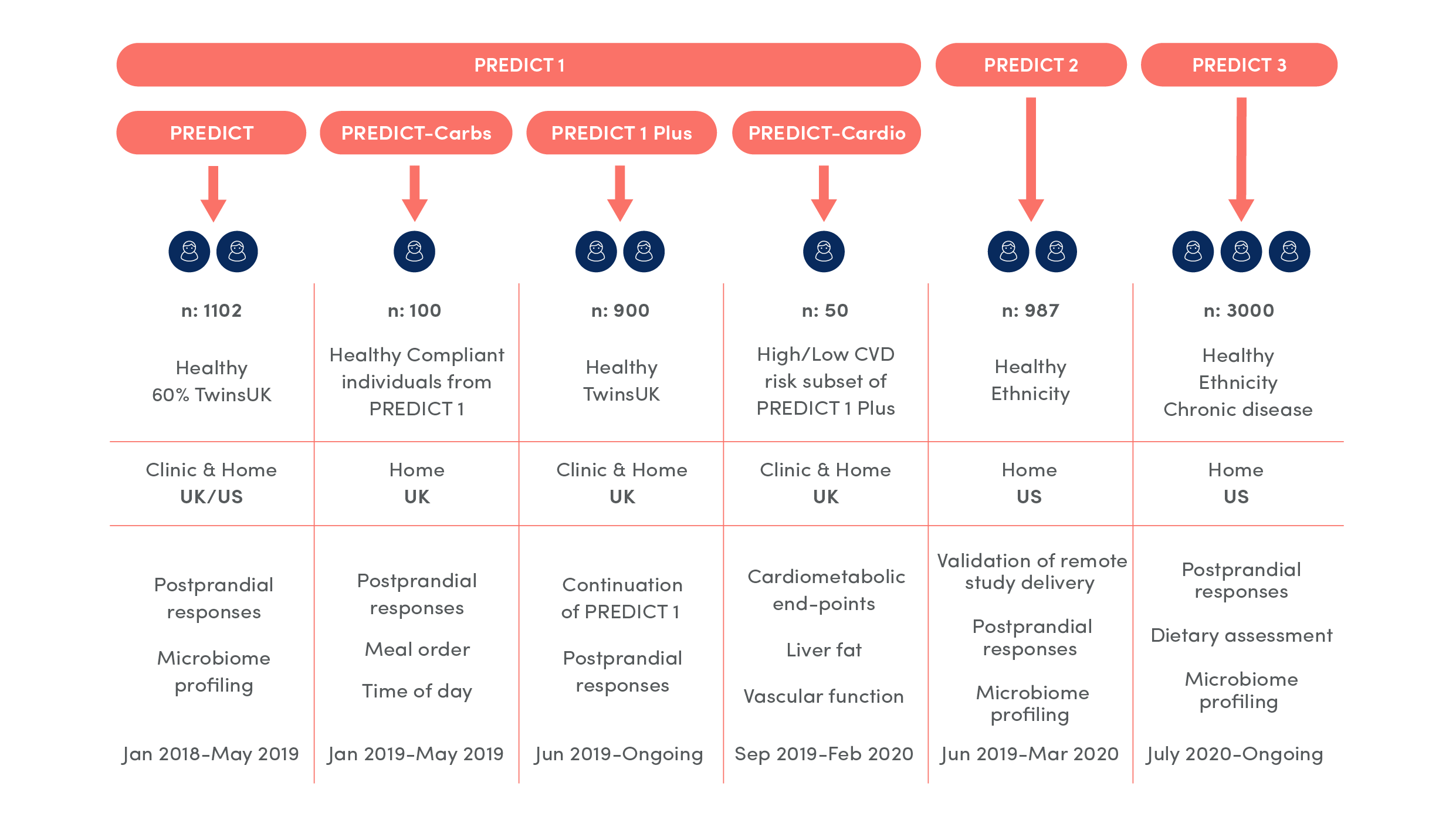 Figure 1: Eating a mixed-nutrient meal elicits short-term changes in blood metabolites (triglycerides, glucose, and insulin are shown here) known as a postprandial response. When we map postprandial responses onto a typical eating pattern consisting of multiple meals and snacks, it becomes clear that we spend most of our day in the postprandial state.

Postprandial changes in circulating metabolites are part of a normal, healthy response to a meal. However, repeated, excessive peaks and dips and extended elevated concentrations of these metabolites can overwhelm the body’s natural response mechanisms and trigger a chain of unfavorable metabolic effects (termed “dietary inflammation”) that can lead to a variety of negative short- and long- term health outcomes.

What is “dietary inflammation”?

“Dietary inflammation” is the term we use to capture the complex interrelated chain of unhealthy metabolic effects. These can be triggered in the hours after we eat the “wrong” foods for our biology (depicted in Figure 2) that are associated with unfavorable health outcomes and weight gain over time.

There are many different mechanisms involved in this process, including oxidative stress, lipoprotein remodeling, increased levels of inflammatory markers, and increased hunger and energy (calorie) intake. The gut microbiome also plays an important role in this process, whereby “good” gut health seems to have a protective effect in minimizing these negative responses.

Ultimately, repeated dietary inflammation over several months and years contributes to unfavorable, low-grade, chronic inflammation, atherosclerosis, beta-cell degeneration, and may lead to weight gain. These factors are associated with an increased risk of developing obesity, type 2 diabetes (T2D), cardiovascular disease (CVD), and other metabolic diseases. Dietary inflammation is the “black box” that helps us better understand the relationship between diet and how it impacts health outcomes in the long-term. 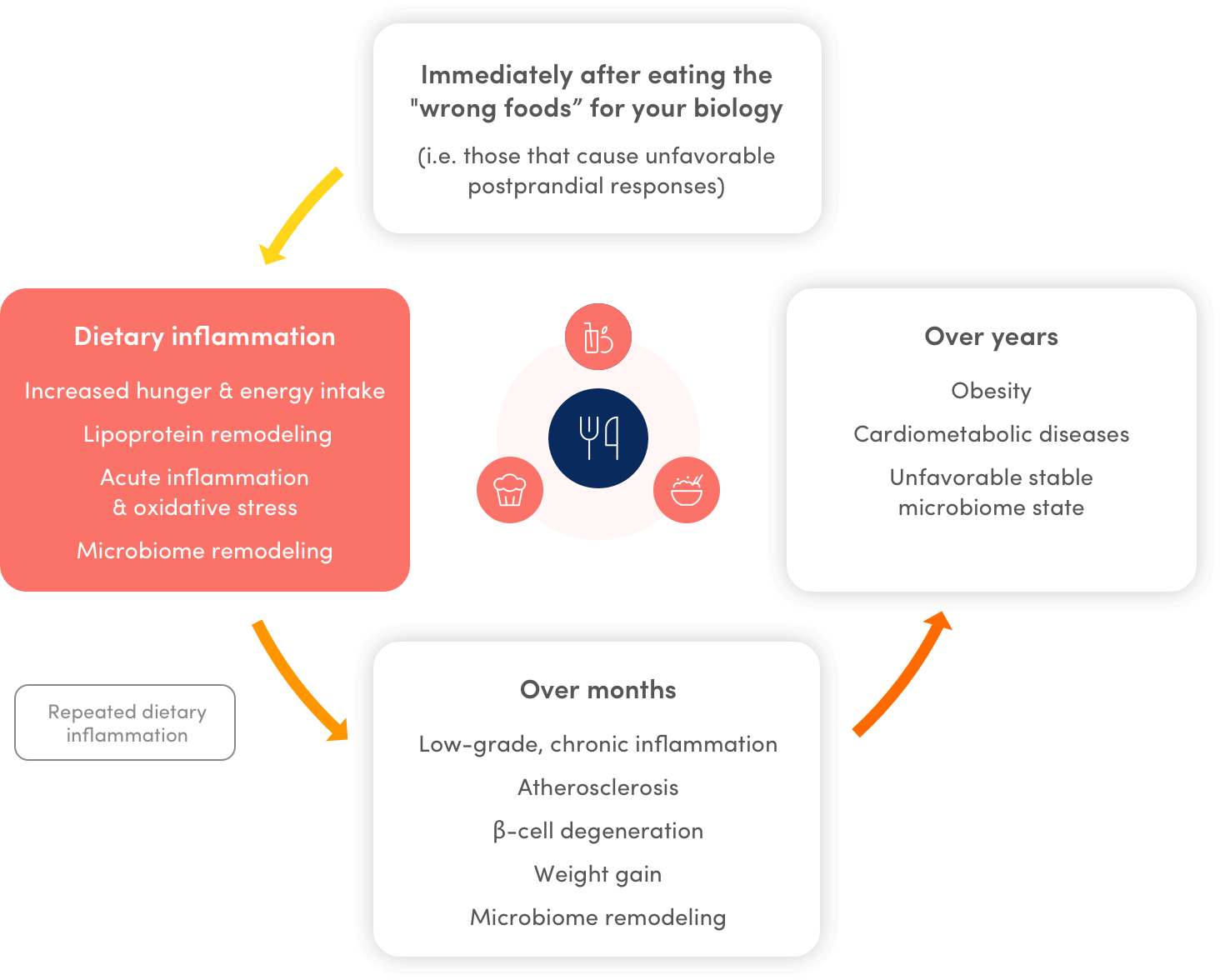 Figure 2: Dietary inflammation involves a complex chain of unhealthy metabolic effects that can be triggered after we eat. Over months and years, this can contribute to weight gain and unfavorable health outcomes.

Our PREDICT studies were designed specifically to understand the determinants of dietary inflammation to food at an unprecedented scale and depth1. This has allowed us to assess the contribution of the many different features of postprandial glycemic, insulinemic, and lipemic responses concerning specific measures of dietary inflammation and health outcomes.

Although we discuss each of the core mechanisms individually, it is important to note that the different mechanisms involved in the dietary inflammation process are interlinked. For example, endothelial dysfunction and resulting atherosclerosis are caused, in part, by lipoprotein remodeling, oxidative stress, and inflammation that occurs postprandially2,3,4.

Research suggests that one of the adverse effects of dietary lipids and glucose on many chronic conditions, including CVD and T2D, depends on their ability to stimulate a low-intensity and transient inflammatory response6. Acute inflammation is a normal physiological defense mechanism, however, repeated, sustained postprandial responses may result in chronic low-grade inflammation that is linked to increased risk of cardiometabolic diseases7,8,9.

Although inflammation can be a consequence of several individual biological factors, it is both chronically10 and acutely (during the postprandial phase)11,12 affected by diet. Mechanisms by which postprandial responses trigger an inflammatory response include their effects on oxidative stress (the generation of reactive oxygen species (ROS))13, hemostatic function (the process of blood clot formation at the site of vessel injury), lipoprotein remodeling7,14, and endotoxemia15 (the presence of endotoxins in the blood).

Several small human studies have investigated the effects of food given as single meals on a handful of inflammatory mediators (typically IL-6 and C-reactive protein (CRP)) postprandially12. However, until now, little research has been done to investigate the integrated impact following mixed meals, of glycemia and lipemia, and their different features on postprandial inflammatory responses, and their mechanisms in the context of interrelated and multidirectional biological determinants.

PREDICT 1 was the first study to investigate postprandial inflammation at scale. Through this research, we were able to characterize the impact of both postprandial glycemia and lipemia on inflammatory responses using both traditional (IL-6) and novel (glycoprotein acetyls; GlycA) biomarkers16.

Our findings show that inflammation (as evidenced by GlycA and IL-6 concentrations) following a meal is highly variable between individuals and that postprandial lipemia was a stronger determinant of inflammation (GlycA) compared with postprandial glycemia. Individuals who experienced a higher postprandial inflammatory response (30% rise in GlycA at 6 h) also had a higher predicted CVD risk compared to the rest of the cohort.

Given the huge variability in postprandial inflammation observed between individuals and their relationship with postprandial glucose and triglycerides, dietary approaches to target these postprandial elevations may beneficially impact inflammatory-induced chronic disease.

The role of glucose in appetite and weight management was originally proposed by Mayer in his ‘glucostatic hypothesis’20, however until now we have not had a good understanding of how postprandial glycemia might impact appetite beyond appetite signals (e.g. leptin, GLP-1, and other peptides)21,22, and research has demonstrated that perceived hunger in real-world conditions is poorly correlated with these hormones.

Our studies have collected hundreds of thousands of self-reported appetite readings, combined with detailed free-living food diaries and glucose readings. As a result, for the first time, our research has demonstrated that postprandial glucose dips (also known as blood sugar crashes in the extreme case) in the 2-4 hours after a meal are associated with23:

The timing of these dips was also associated with indices of insulin sensitivity. These findings suggest that eating certain foods may lead to increased hunger and additional calorie intake and that gaining a better understanding of an individual’s unique responses to foods might be a useful strategy for successful long-term weight loss.

However, a high and/or extended lipemic response results in triglycerides remaining in the circulation for a longer period, thus promoting an unfavorable remodeling of the circulating lipoproteins. This remodeling is central to the development of what is called the atherogenic lipoprotein phenotype25,26, namely an increase in remnant lipoproteins (RLP) and small dense triglyceride-enriched high-density lipoprotein (HDL) and low-density lipoprotein (LDL) particles, and associated increased CVD risk7,27. These small changes in the size and composition of lipoprotein subfractions confer different atherogenic potential (the capacity to initiate, increase, or accelerate the process of artery damage) via effects on inflammatory measures, oxidation, and endothelial dysfunction27,28.

Our PREDICT results demonstrate that even among healthy individuals there is a postprandial increase in harmful, small, triglyceride-enriched LDL and HDL particles and TRL cholesterol, and a reduction in the protective large cholesterol-enriched HDL particles (unpublished results). However, this response is highly variable between individuals even following a tightly controlled study day involving two standardized test meals. Such that even with a very high fat intake from the standardized meal, some individuals can remove all the triglyceride that enters their blood within a healthy time frame without any apparent metabolic stress, while others experience significant lipemia even at 6 hours, and subsequent remodeling into atherogenic lipoproteins.

The gut microbiome can be rapidly modified by diet through the continuous provision of compounds that feed specific gut microbes29,30. While short-term dietary changes have been shown to rapidly and reproducibly shift the composition of the gut microbiome, these changes appear to be temporary if an individual’s diet returns to “normal”. Habitual dietary intake over months and years is thought to have a greater influence on shaping gut microbiome composition.

An adult’s core gut microbial groups are thought to be resilient to short-term dietary changes. However longer-term shifts in dietary patterns are suggested to have a greater impact on shifting the composition of the gut microbiome towards either a favorable or unfavorable microbiome state, the latter of which we believe to be associated with dietary inflammation.

Dysbiosis (broadly defined as an imbalance between “healthy” and “unhealthy” bacteria) is associated with intestinal inflammation, reduced gut barrier integrity, and increased circulating levels of metabolites that may facilitate the development of CVD32. The gut microbiota has also been suggested to influence insulin resistance and T2D through many pathways that predominantly impact beta-cell function, chronic low-grade inflammation, lipogenesis, and gluconeogenesis33.

Detailed insights into this synergistic relationship are described in more detail here.

Gut microbial community structure (the composition of a microbial community and the abundance of its members) and diversity (the number of different microbial species) are known to influence postprandial glycemia and lipemia, as well as many of the other mechanisms that form part of the dietary inflammation process. For example, gut microbiome diversity may play a key role in acute inflammation, with findings from our research suggesting that individuals with a higher microbial alpha-diversity and lower visceral fat mass had an attenuated inflammatory response after eating standardized test meals16.

As individuals respond very differently to the same foods, dietary advice focused on minimizing dietary inflammation inevitably must be tailored to an individual’s biology for maximum benefit. Through our novel research, we have been able to combine our new understanding of the impact of specific foods on previously poorly studied features of the integrated postprandial responses and the complex interplay between the gut microbiome and diet to develop ZOE scores and recommendations that are personalized to each individual. ZOE scores are designed to promote foods that limit dietary inflammation by minimizing the frequency and duration of unfavorable postprandial responses. We believe that by eating in a way that is guided by these personalized recommendations, one might reduce dietary inflammation and improve both short- and long-term health outcomes

An overview of our science

The gut microbiome plays an important role in our health

Get occasional updates on our latest developments and scientific discoveries. No spam. We promise.